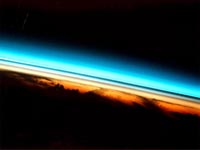 The Earth is surrounded by a blanket of air, which we call the atmosphere. The atmosphere has no precise upper limit, but for all practical purposes the absolute top can be regarded as being at about 200 km. However, from a scientific point of view the atmosphere reaches up to 600-700 km. Thus we are only able to see - and feel - what occurs fairly close to the ground. The atmospheric air has over large parts a fairly stable composition of roughly 70% nitrogene, 21% oxygene and a variety of trace gases.

Life on Earth is supported by the atmosphere. The atmosphere absorbs the energy from the Sun, recycles water and other chemicals, and works with the electrical and magnetic forces to provide a moderate climate. The atmosphere also protects us from high-energy radiation and the frigid vacuum of space. 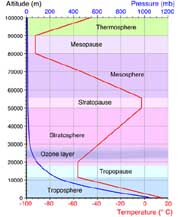 The structure of the atmosphere

The envelope of gas surrounding the Earth changes from the ground up. Four distinct horizontal layers have been identified based on thermal and convective characteristics (temperature changes), chemical composition, movement, and density. From the surface of the Earth upwards the layers are:

(a) The troposphere, in which convection is often prominent and in which most significant weather occurs, where temperature generally declines with height. It is extending to the tropopause at a somewhat variable height, generally about 11 km over middle and higher latitudes and 18 km near the Equator. This layer is known as the lower atmosphere.

(b) The stratosphere, in which there is much less vertical motion, and which extends from the tropopause to about 50 km at the stratopaus e. The lowest region of this layer is usually isothermal, but the temperature then increases with height.

(c) The mesosphere, in which there is once again more convection, extending from the stratopause to a height of about 86-100 km at the mesopause. In this region, the temperatures again fall as low as -93°C as you increase in altitude. The chemicals are in an excited state, as they absorb energy from the Sun. The regions of the stratosphere and the mesosphere, along with the stratopause and mesopause, are called the middle atmosphere.

(d) The thermosphere, extending from the mesopause to the effective limit of the atmosphere, at about 200-600 km. Temperatures in this region can go as high as 1,727°C. Chemical reactions occur much faster here than on the surface of the Earth. This layer is known as the upper atmosphere.

(e) The region above 700 km, at which height atoms may begin to escape into space is known as the exosphere.

On the basis of chemical composition the atmosphere consists of only two layers, the homosphere (largely identical with the troposphere, stratosphere and mesosphere) in which the composition is essentially constant, an the overlying heterosphere.