Hail is solid precipitation that falls from thunderstorms or beefy showers as round or irregular balls of ice or ice-pellets, generally taken to be 5mm in diameter or larger. Hail originates as a frozen rain drop or graupel that is kept from falling by updraft currents within a cumulonimbus cloud triggerering heavy showers or thunderstorms. Each time the ice pellets or small hail stones are pushed into the cold upper layers, they collide with supercooled water droplets which freeze to the growing hailstones. 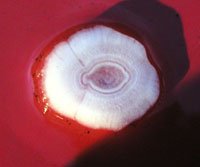 Hailstones often grow in alternating layers of rime and glaze, when they are continuously rotated up and down by updrafts and downdrafts. The freezing process repeats itself until the weight of the hail stone causes it to fall to the ground or the updraft weakens enough to eventually end the cycle.

Hail stones can grow to the size of a softball exceeding 50mm across. Large hailstones fall at speeds faster than 100 mph (160 kph). The heaviest individual hailstones of about 1kg were recorded at Gopalganj, Bangladesh on 14 April 1986. However, hail stones of 3.4kg were reported from Hyderabad, India in 1939. The largest hail stone ever was reported from Yuwu, China in 1902.

The table below gives some hail size estimates and descriptions. The potential damage and hailstorm intensity is described H0 to H10 according to the TORRO Hail Storm Intensity Scale.

The potential damage which a hailstone can inflict is mainly proportional to the stone's size and the windspeed in which it falls. Clearly, a 30 mm diameter hailstone falling in high winds has a greater damage potential than a stone of the same size falling in light (or even updraught) winds. To a lesser extent, hailstone hardness and shape / fall orientation can also affect the degree of damage.