Cloudseeding is the technique of inducing rain from a cloud, usually by dropping suitable particles into clouds containing supercooled water in an attempt to cause them to dissipate, modify their structure, or alter the intensity of associated phenomena, such as wind speed or hail.

Natural rainfall occurs when supercooled cold water contacts particles of dust, salt or sand forming ice crystals. The ice crystals provide a nucleus (tiny solid or liquid particles, suspended in the atmosphere) around which more water droplets can attach, increasing the size of the droplet, or in colder air snow flakes. When the droplet or snow flake, becomes large enough, it falls as snow or rain. 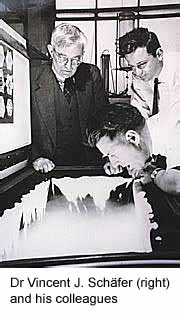 Cloudseeding got its start in 1946 when Dr. Vincent J. Schaefer, working at the General Electric Laboratory in New York, was involved with research to create artificial clouds in a chilled chamber. During one experiment, Schaefer thought the chamber was too warm and placed dry ice inside to cool it. Water vapor in the chamber formed a cloud around the dry ice. The ice crystals in the dry ice had provided a nucleus around which droplets of water could form inside the chamber.

This is the cold rain process. Cloud seeding is thought to increase the number of these nuclei available to take greater advantage of the moisture in the cloud and form raindrops that otherwise would not have formed.

Another process, the warm rain process, usually involves clouds in tropical regions that never reach the freezing point. In these clouds, raindrops form around a hygroscopic nuclei, a particle that attracts water such as salt or dust. Small droplets collide and coalesce unti l they form a drop large and heavy enough to fall.

To encourage the warm rain process, calcium chloride is usually used to provide the nucleus for raindrop formation. For the cold rain process, silver-iodide (introduced from the air or ground) can be used as a nuclei because its structure is very similar to ice crystals. Dry ice introduced (at -80°C) from the air into cloud lowers the air temperature so that (particularly at temperatures below -40°C) some of the supercooled water droplets are converted into ice crystals which then grow by collisions with further droplets

Seeding of tropical cumuli sought to exploit the latent heat released by freezing as well. This strategy of dynamic seeding assumed that the additional latent heat would add buoyancy, strengthen the updrafts, ensure more low-level convergence, and ultimately cause explosive growth of properly selected cumuli.

Other substances, e.g. common salt or fine water droplets, may also be used to encourage coalescence. Natural seeding may be significant in cases where ice crystals from a high 'releaser' cloud (e.g. altostratus or cirrostratus) fall into a supercooled water 'spender' cloud (e.g. nimbostratus) and encourage ice-crystal growth. Most methods of limiting the development of hail rely on cloud seeding using ice nucleants, or with silver oxide. In theory, hail damage can be reduced by 25% through cloud seeding. However, despite many claims no quantifiable results have been produced in attempts to minimize damaging hail.